HomeBlog PostTech Giants vs Banks. Who will be the Winner?

Tech Giants vs Banks. Who will be the Winner?

“In terms of where we think real challenges are going to come into this market, it will be potentially around the entry of Big Tech firms,” FCA executive director for competition, Christopher Woolard.

“We suspect that many of those firms will not want to take capital on their balance sheets, they won’t actually want to become a bank as such, but they may well want to offer products that compete directly with banks, like simple lending products.”

Britain has sought to boost competition in banking, a sector dominated by the Big Four, HSBC, Lloyds, RBS, and Barclays. Many new “challenger” banks have entered the market but have yet to win major market share.

Fees and charges allow banks to cross-subsidise free-in-credit bank accounts that underpin market share, but the entry of tech companies could change that, forcing banks to introduce charges for accounts, the FCA said

After the 2008 financial and banking crisis, the industry has shown signs of renewed health. Scenario is looking good. But while many believe the industry is unlikely to experience such discomfort again anytime soon, signals beneath the surface show the industry is under tension: profits remain elusive, margins are decreasing, revenue growth is slowing and perspectives are lackadaisical. Even more worryingly, Return on Equity (ROE) has fallen to around 9% and continues to shrink.

According to a report by the World Economic Forum (WEF), Banks are faced with more competitive disruption from technology behemoths than financial technology (FinTech) start-ups.

Drawing on interviews with finance and technology industry experts, the report found that banks were significantly lagging behind technology giants in the development of technologies like cloud computing, artificial intelligence and big data analytics.

Lenders have instead been turning to tech corporations to provide these functions, the report said. It singled out Amazon, Google and Facebook as three companies dominating the market in these areas of innovation. One example the report referred to was Amazon Web Services, which has lured several financial institutions including Aon, Capital One and NASDAQ to Amazon’s cloud computing business. 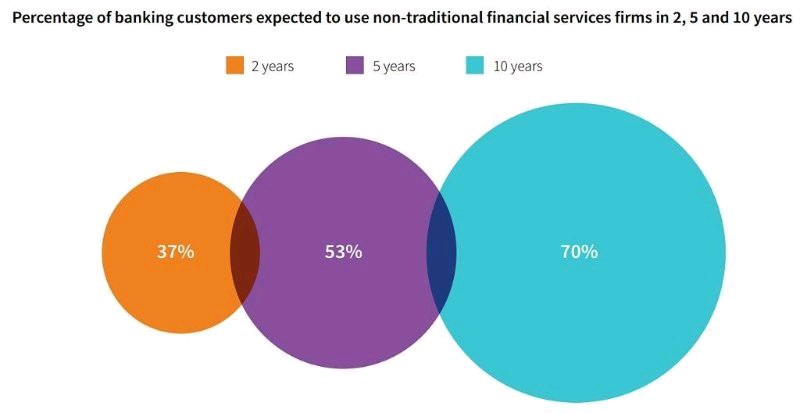 According to Bain, “Many of the tech giants possess the ingredients of success: digital prowess, large customer bases, organizations well versed in improving the customer experience, and ample leeway to extend their corporate brands into banking.” More concerning may be that some of these firms are generating a level of trust previously reserved only for traditional banks and financial institutions.

“There are two big opportunities in the future financial industry. One is online banking, where all the financial institutions go online; the other is internet finance, which is purely led by outsiders. – Jack Ma.

In both instances, success of these organizations in finance will be based on the ability for the institution to collect and analyze massive data sets, learn from the insights to improve personalization and digital engagement in real-time, and expand offerings in response to consumer needs.

From mobile and open banking and blockchain, to AI and machine learning, new technologies are creating huge opportunities and challenges for FinTech players and established banking and financial institutions. There is, of course, more than one way to disrupt. FinTech providers often have the best of both worlds, in that they may either complement banks’ own digital transformation programs, or challenge them by providing consumers with alternatives in the form of better customer experience, quick service and ease of life.

With improved regulatory clarity and the prospect of normalized interest rates, technology will be the future battleground of differentiation for both consumers and investors. As an example, most bank consumers in developed markets are expected to have access to real-time payments by the end of 2018 allowing banking transactions to be completed with a swipe of the smartphone.

But customer-facing applications aren’t the only differentiators that investors should be watching. Indeed as mobile banking increases customer traffic, having efficient scalable back-end systems becomes critical. Behind the scenes, digitization in banking has the potential to boost back-office efficiencies, reduce operational risk and ultimately improve profitability.

Over the long term, tech advances such as artificial intelligence (AI) and blockchain will clearly play a role in the evolution of banking. However, modernizing the infrastructure backbone—that is, the core banking systems which handle the backbone of a bank’s activities, such as deposits and credits—is arguably the most important step banks will need to take.

“If we want to be digital to the core and act like a technology company, it’s best we learn from the technology greats, figure out how they do it and see if we can’t bring in some of those things internally.” DBS Bank Chief Information Officer David Gledhill

In order to remain competitive, banks will need to update technology on the back end in order to deliver a seamless experience on the front end since customers will have little tolerance for glitchy apps no matter how sleek the user interface.

(Techfin usually references a technology firm that finds a better way to deliver financial products as part of a broader offering of services. Examples of techfin companies include Google, Amazon, Facebook and Apple, Baidu, Alibaba and Tencent etc.)

Tech giants have an edge over traditional banks. 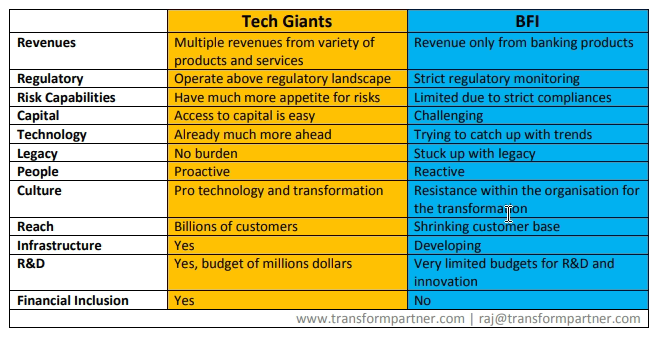 At present, tech giants look like winning the game.

The author of this article Raj Grover is a strategic consultant working with several corporate, government bodies, and startups across the globe. He formulates strategies, policies and planning, works on innovative ideas, new product development and has access to disruptive technology. His customized workshops and training sessions help the leadership and team in adapting a clear vision for their digital transformation journey.

He is the founder of Transform Partner, the digital transformation consultancy based in UK and India. He can be reached at: raj(at)transformpartner.com.